“The Belitung Shipwreck and its Impilications for the History of Tea”
Lecture by Professor Victor Mair, University of Pennsylvania

Workshop on Thought and Religion in China from the Perspective of Manuscript Culture, 4th Century BCE to 10th Century CE 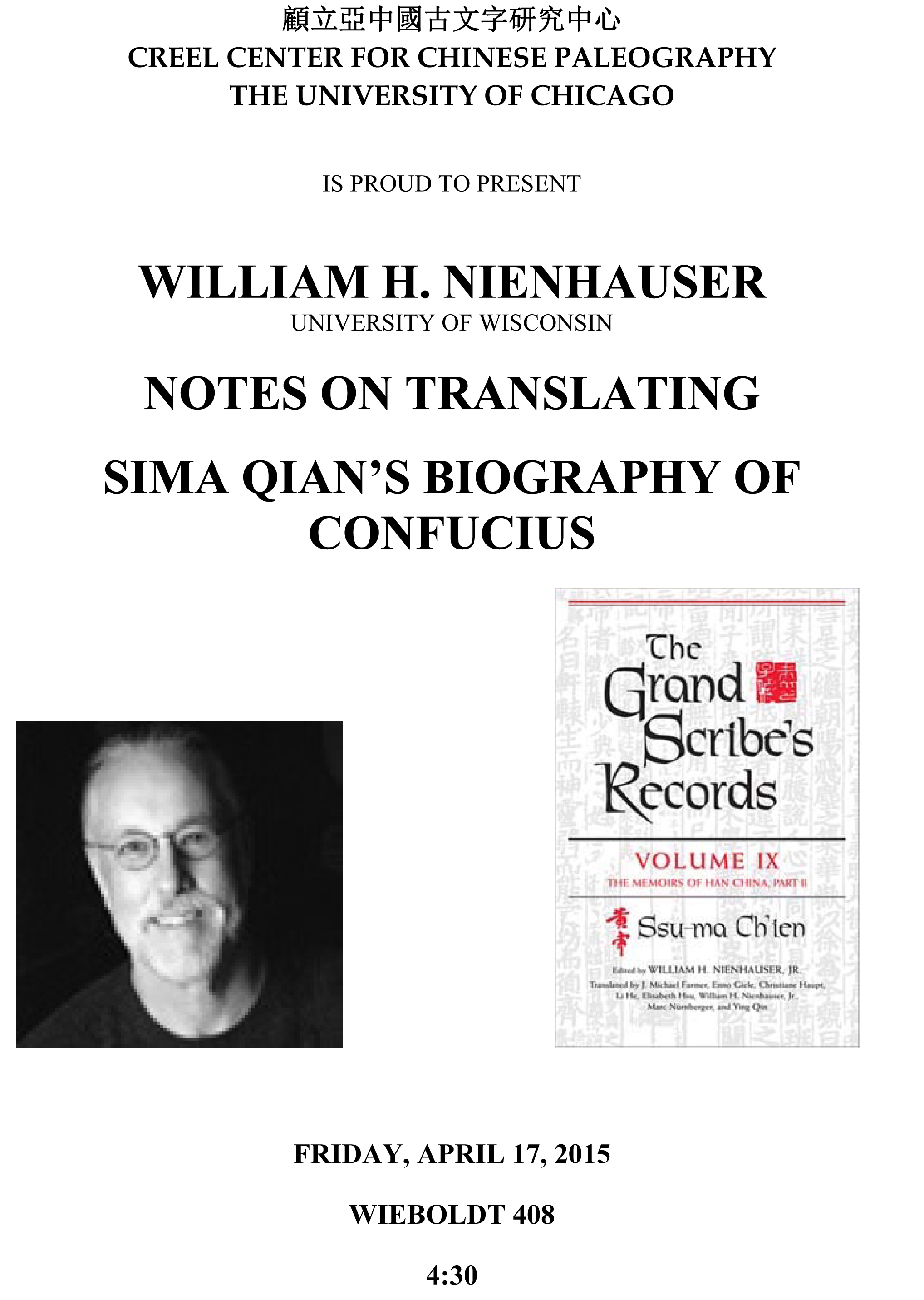 BRONZES, URBANISM, AND INTERACTION: WORKSHOP ON THE ARCHAEOLOGY OF ANYANG


Workshop held by the Creel Center for Chinese Paleography

THE LAST CAPITAL OF THE SHANG DYNASTY: NEW DEVELOPMENTS IN THE STUDY OF THE FORMATION OF THE YINXU SETTLEMENT IN ANYANG, HENAN, CHINA

The Rise of Writing in Early China

2. Locations : University of Chicago, The Art Institute of Chicago

The Creel Center for Chinese Paleography is proud to sponsor “Ancient Chinese Bronzes from the Shouyang Studio and Elsewhere: An International Conference Commemorating Twenty Years of Discoveries,” a major international conference focusing on recently discovered Chinese bronzes to be held in Chicago, November 5-6-7, 2010. Celebrating the opening of the special exhibition “Ancient Chinese Bronzes from the Shouyang Studio: The Katherine and George Fan Collections” to be held at the Art Institute of Chicago, November 5-December 31, 2010, the conference will bring together twenty of the leading scholars of ancient Chinese bronzes, and especially their inscriptions, from around the world for three days of presentations and discussions. Click here for a detailed schedule of the conference and for its locations.

By focusing on newly excavated manuscripts, this symposium will consider the following four topics related to the texts and interpretations of the Book of Odes:

The Creel Center for Chinese Paleography, with the support of the Luce Initiative on East Asian Archaeology and Early History of the Henry Luce Foundation, invites applications from graduate students in North America to participate in a study tour and seminar to be held in the People’s Republic of China during the first half of July 2009. The tour will begin on or about July 1 in Shanghai with visits to the Shanghai Museum and to the Center for Research on Chinese Excavated Classics and Paleography of Fudan University. From Shanghai, we will travel to Wuhan, Hubei, where the students will join a group of students from throughout China for a one-week course on bamboo-strip manuscripts with professors of the Centre for the Study of Bamboo and Silk Manuscripts of Wuhan University. During this week, there will be opportunities to visit both the Hubei Provincial Museum and also the Jingzhou City Museum, and to examine the bamboo strip materials housed there. At the end of this week, the students will be joined by Li Xueqin 李学勤, Qiu Xigui 裘锡圭, Lin Yun 林沄 and Zeng Xiangtong 曾宪通 for a two-day master class. From Wuhan, we will then travel to Changsha to view the Mawangdui silk manuscripts housed in the Hunan Provincial Museum.

All expenses will be paid by the Creel Center, though students from institutions other than the University of Chicago will be asked to arrange their own transportation from their home to and from Chicago. Students wishing to stay on in China after the study tour will be free to do so at their own expense.

Students wishing to be considered for this study tour should submit the following application materials to the Creel Center:

• A letter of application stating your background, your interests in Chinese studies, and your goals with respect to Chinese paleography.
• Three letters of recommendation, one of which should attest to your ability to communicate fluently in Chinese.
• A transcript from your home institution.
• A 15-20 page writing sample indicating your ability to use classical Chinese sources.

Please send these materials, no later than 6 March 2009, to:

Decisions will be announced in late March 2009.

You can download a copy of this Announcement here.